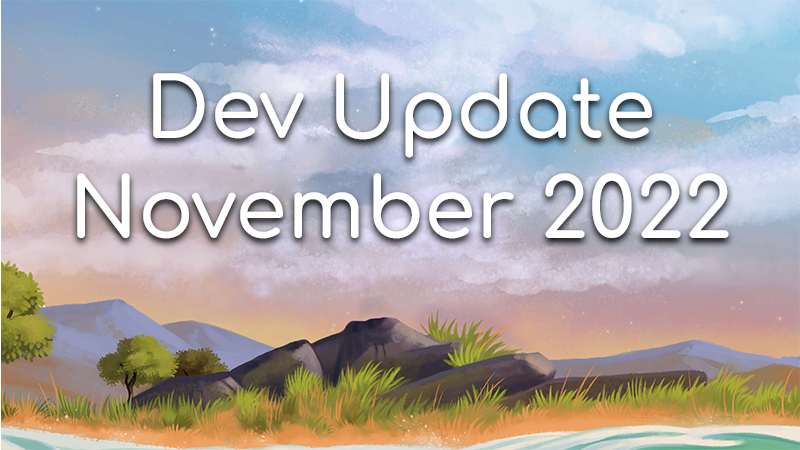 It’s been a hot minute since our last development update so I thought I’d let you all know what Paul, the (only) developer has been up to, as well as share some community screenshots that players have submitted over on the Adapt Discord.

Over to you Paul!

Since last we spoke, I’ve been putting a lot of work into building the fundamentals behind player progression in-game. So here’s a quick breakdown of how things are looking so far in this three-part system.

Requests are the next big advancement for interactions with AI, and will replace the current ‘befriend’ mechanic by allowing players to complete requests for AI in order to improve your relationship. The first iteration of this system will be delivery requests, where AI will occasionally request an item from the environment, such as food, and players can find and gift that item to complete the request. In the future I’ll be expanding on this system to include more kinds of interesting items to interact with and gift, as well as other kinds of requests.

New Missions become periodically available during play, and provide players with optional activities in exchange for new parts and genetics. This mechanism represents the primary means of genetic progression for your species during a run, but it’s important to note that these parts and genetics will only become available for your species and its offspring within that species family tree. To unlock new character options permanently for new games, you’ll have to complete achievements.

Achievements are the player’s primary means of permanently unlocking new parts and genetics. Once a part is unlocked via an associated achievement, you’ll have access to it during character creation for all future games. This means when starting future games, you’ll be able to begin with much more diverse creatures without the need to evolve during play.

In preparation for the new Progression systems, especially Requests, I’ve made some improvements to the current interaction system and its associated UI. In future updates, players will have access to a larger variety of interactions by simply holding the interaction key (default ‘F’). This new system will not only expand to include new kinds of interactions such as grooming, and competition, but will also include some of the currently context-dependent actions which can feel a bit clunky such as nesting.

Everybody loves new parts. So let’s take a look at some upcoming stuff! But first… There’s a big change coming to part genetics in the next release, and that is that Part’s will now have access to variable attributes even when they share the same gene. This change is in an attempt to create more variability within similar parts to better represent specialization within anatomical boundaries.

As you can see, despite all being associated with the new Beak Gene, these fancy new beak parts offer several different base dietary abilities.

This change will usher in a number of other quality of life improvements to the Part Shop, as well as a restructure of the Adaptation / Upgrading system currently in the game. I am hopeful that these improvements will both improve the intuitiveness of the system, as well as offer some additional customization options for players.